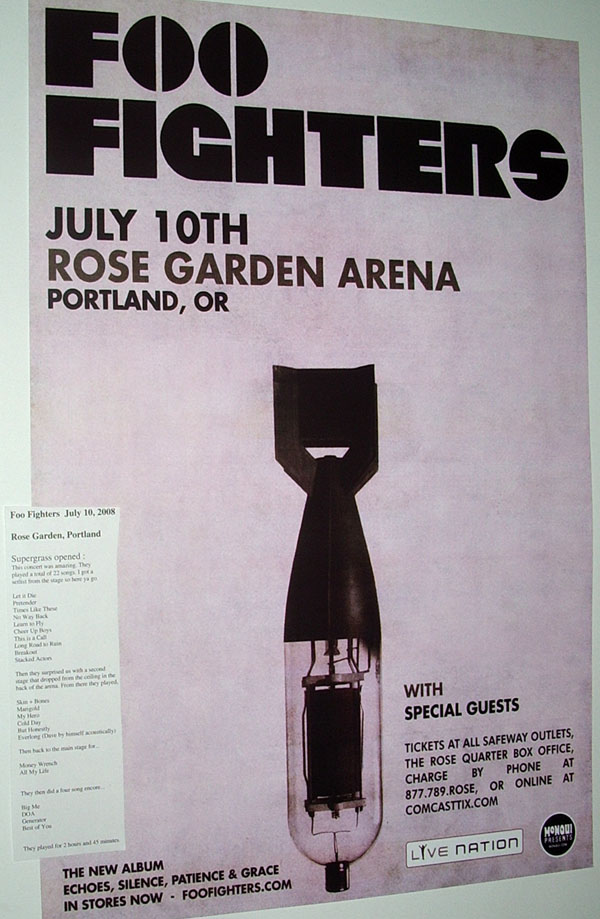 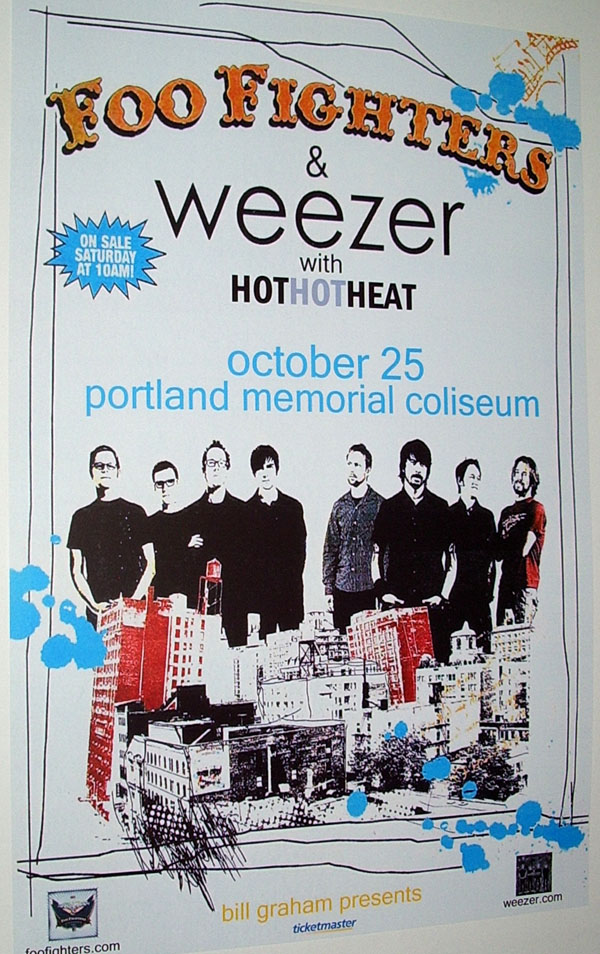 This Foo Fighters concert poster available at this ebay store

This Foo Fighters concert poster available at this ebay store

Having commemorated their tenth anniversary with a year-plus run commencing with a double studio album hailed by the New York Times as "an unexpected magnum opus," a sold out arena tour built on that first disc's rock foundation followed by a toned down and intimate theater trek that highlighted the softer side showcased on that record's second half and capped off by a headlining gig at London's Hyde Park for a crowd of 85,000, the question looms larger than any in the Foo Fighters' career to date: What do they do for an encore?

The answer comes in the form of the band's sixth studio album Echoes, Silence, Patience & Grace. Produced by Gil Norton, who last worked with the band on 1997's double-platinum The Colour and The Shape (recently reissued in deluxe 10th anniversary form), Dave Grohl, bassist Nate Mendel, drummer Taylor Hawkins and guitarist Chris Shiflett have crafted a 12-track milestone that showcases and reconciles the band's every strength and sensibility in the most complex and confident Foo Fighters album to date. Echoes, Silence, Patience & Grace opens with two prime examples of the newest weapon in the formidable Foo Fighters arsenal: First single "The Pretender" and second salvo "Let It Die" both begin with sparse, ominous minor key single guitar and vocal intros and build gradually into frenetic, explosive anthems that stop on a dime in just enough time to leave the listener fully winded but wanting more. The trademark FF hooks upon hooks style is still represented in the propulsive riffing of "Erase/Replace," the undeniable sing-along refrain of "Long Road To Ruin," and the hyper-melodic centerpiece of the record "Cheer Up Boys (Your Make-Up Is Running)," all of which stand to become instant fan favorites and staples of the FF live set for years to come. It's the surprises, however, that truly define Echoes, Silence, Patience & Grace. The stark, confessional "Stranger Things Have Happened," the loamy sunset-tinged shuffle of "Summer's End," guitar prodigy Kaki King's guest spot on the acoustic instrumental) "The Ballad Of The Beaconsfield Miners" (dedicated to those trapped in the April 2006 Australian goldmine collapse-one of whom took Grohl up on his offer of free tickets and beer later that year at the Sydney Opera House), and a pair of majestic ballads featuring Grohl's debut on piano, "Statues" and the album closer "Home," which features the album's namesake lyric. The road to Echoes, Silence, Patience & Grace has been anything but easy--even the formation of Foo Fighters as a band is hard to pin down to a concrete date or circumstance, 1995's now classic self-titled debut itself evolving from home recordings of compositions created largely during Grohl's tenure in Nirvana. 12 years in and going stronger than ever, the band and its catalogue of platinum-plus, multiple-Grammy-winning albums and classic tracks -Foo Fighters ("This Is A Call," "I'll Stick Around," "For All The Cows," "Big Me"), The Colour and The Shape ("Monkey Wrench," "My Hero," "Walking After You," "Everlong"), There Is Nothing Left To Lose ("Learn To Fly," Next Year," "Breakout"), One By One ("All My Life," "Times Like These"), In Your Honor ("Best of You," "DOA," "Virginia Moon," "Miracle"), the live Skin And Bones ("Skin And Bones," "Marigold") and now Echoes, Silence, Patience & Grace - Foo Fighters have established themselves as the epitome of the American rock band for generations to come.

Concert Posters of Artists and Bands similar to the Foo Fighters